It’s hard to be still in the middle of a place like Grand Central Station.

I’ve been temping here. Sitting at a tiny glowing kiosk that sells jewelry in the middle of a busy passage. Across from me, tracks 17 & 16 and 15 & 14 are portals to destinations. People run towards them. Or walk slowly out while staring at their phones. Arriving and Departing. Rushing and Dawdling. From each portal, cold February air blows in from the tracks blurring the lines between indoor and outdoor. Between where we are and where we might be. 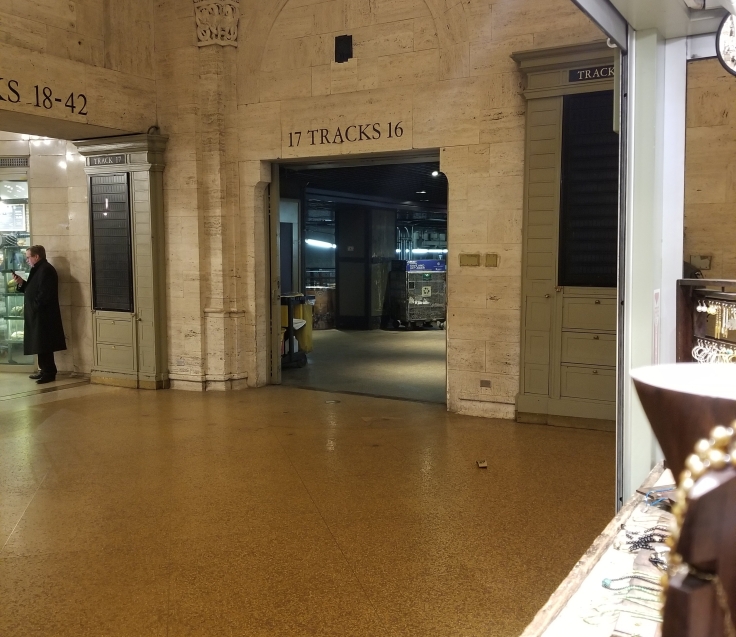 Next to the doors, a woman stands alone with piles of…stuff. A couple suitcases, a couple grocery bags. She is unkempt, but colorful, and talking. Loudly. Monologuing to no one, or maybe to everyone. I can’t hear her words clearly, only the rhythms of her speech and the odd phrase as she bemoans the world’s inequalities, all the while crocheting furiously with hot pink yarn.

Sitting at this kiosk feels a bit like being in one of those movie shots where I am standing still looking at the camera and the world is flying around me at superspeed. I am paused and everyone else is in fast forward. I feel antsy to be so still in a place that is so geared towards movement. Transience. Transitions. I want to get on a train and leave.

From time to time, people do join me in my stillness for a moment. Sometimes they buy jewelry from the kiosk, but more often, they ask:

“Where is the bathroom?”

“Where is the Apple store?”

I wonder how many people have passed me as I sit here? Thousands, I expect.

Occasionally someone passes weirdly close to my chair – so close that I twitch, feeling that primal moment of space invasion. I wonder if they will speak to me (since that might help justify the proximity), but then they move past and it is clear that I am more like part of the kiosk than an actual human sitting at it.

I spend a lot of time looking around during these hours here.

Next to the tracks is a bakery where the line is either long or nonexistent and never in between. Watching that bakery makes me feel like I am in the opening scene of the New York City version of Beauty and the Beast. “There goes the baker with his tray like always…the same old bread and roles to sell.” We’re pretty far from the provincial town, but in many ways, every morning is still the same—New Yorkers in black holding extra-large coffee cups and rushing off of or on to trains in pursuit of dreams that cannot wait and ambitions that cannot be quashed.

I wonder about all of these people.

About the woman walking past with two rolls of wrapping paper. Maybe everyone in her family is born in February. Or its her daughter’s twins birthdays and she couldn’t resist too many things for each delicious, chubby- cheeked baby.

I wonder about the surprising number of women who look like they regret the shoes they put on that morning (not that I haven’t been there too). I feel my face contort with sympathy as I see them walking in that all-too-familiar favoring of one side or heel where a bright red spot is blooming. I wonder about all these women with bare legs and not enough coat. About two men walking past in one direction, and returning with gigantic sodas and bags of fast food, their jeans well below their hips but still somehow technically “up.” I wonder about two older women, one in a silver lamé puffer coat, and the other in a gold one (and I can’t help thinking of the old rhyme “make new friends and keep the old, one is silver and the other gold”). I see people wearing all manner of headphones, or with bluetooth lights blinking by their ears that make them look like cyborgs. I wonder about people bundled up to their eyeballs (my tribe) and others with no coats at all. I wonder about the loooong line at the beer stand, and about the groups of people who stop right in front of the kiosk and in the middle of the hallway to stare at a point of interest on the Grand Central audio tour.

People dawdle and kill time. Or run by, and make up for lost time.

Each person I notice, each observation I note down in my book, becomes part of my story. And suddenly, I wonder, who have I  been seen by, whose story I’ve become part of when I didn’t know?

I’m sitting at my booth, wondering about everyone passing by, and I look up and see a conductor has joined me in stillness, using his punch on a ticket. I wonder if he’s clocking out, or … I don’t know. He’s so very focused. I look away but a moment later, he’s standing next to me.

“I just have to give this to you.”

And he hands me the ticket. And as the ticket passes from his hand to mine, I look at it and see… 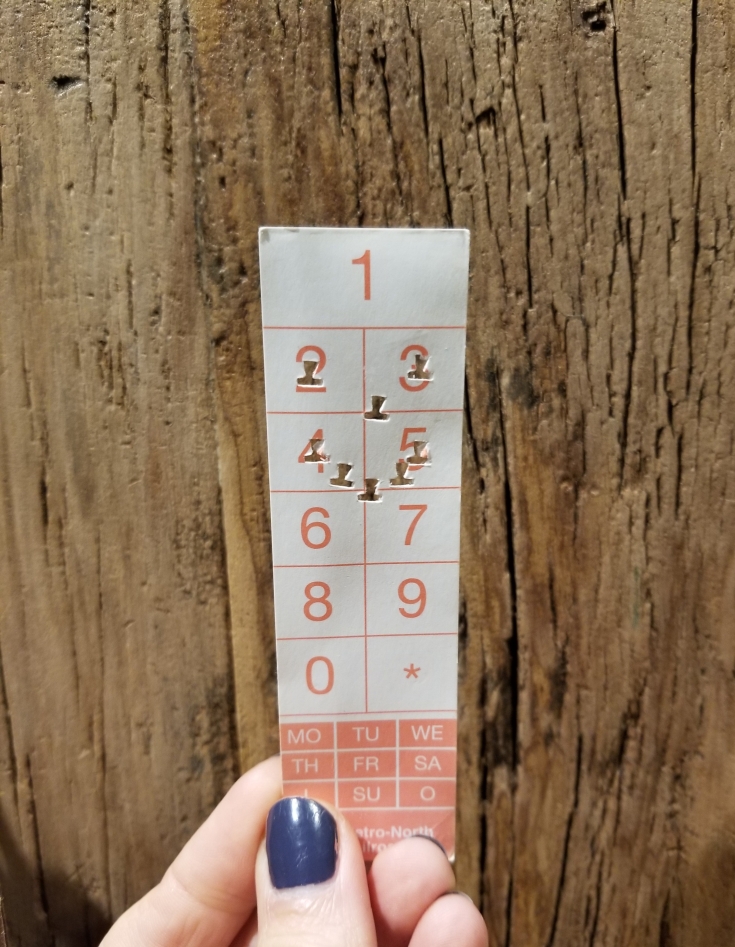 And immediately start laughing, the smile on my face echoing the one on the ticket.

“Oh what a sight!” he says, “Dimples and everything! You weren’t smiling and I thought it would be wonderful to see, and it is!”

Even the feminist in me can’t be mad at this man, for this is so far away from “hey beautiful, give us a smile.” This is effort from a fellow human, who, while I was still and trying to see everyone, took a moment to be still and see me too.  ♥